There was once a time when the waters were honoured and the wells were tended by the beautiful Well Maidens, who were seen as serving a very important purpose. They provided weary travellers with all means of sustenance, not just water and food to nourish the body, but spiritual connection to all that welled from within the Earth. Water was perceived as a sacred conduit to this most potent of life force, and the Well Maiden as the mediator of this power via her golden cup.

All the while the wells were honoured and tended by the maidens, and the maidens themselves were cherished by all, the land flourished. Indeed, we are told that the court of the Rich Fisher ‘had made the land resplendent with gold and silver and splendid furs, precious brocaded silks, fine foodstuffs and cloth, gerfalcons and merlins, goshawks, sparrow hawks and falcons.’

But then one awful day everything changed. A king came by who sought not to serve his people as a king ought, but to dominate and control. Instead of accepting hospitality from the Well Maidens he raped and humiliated them, encouraging his men to follow his wicked example. Then he tried to take on their powers for himself, taking the golden cup ‘ he carried it off along with the girl.’ The Well Maidens withdrew, never to come forth from any of the wells and serve again. Food and hospitality was no longer forthcoming, but more tragically the gift of spiritual nourishment, the very bond between the Earth and mankind, was lost. The land was wasted. Nothing grew, the waters were polluted and the people became hungry and dissatisfied. The king himself was wounded, afflicted by the wound caused by his abuse of sexual power. This was how the Wasteland came about, how the Dolorous Blow was struck.

This story was originally committed to paper many hundreds of years ago, seen as so incredibly important by the author that he called it the Elucidation, the explanation of why all that was to follow occurred. This is what began the Arthurian Quest, the journey to reclaim that which has been lost, or at least hidden from sight. And the story of the rape of the Well Maidens is still as resonant today as it was in the Middle Ages. Each time a woman is raped, or forced into slavery, or in some way coerced or maimed, a crime occurs that makes the body of the Earth recoil in horror. In some tragic way, our connection to all that is sacred becomes more tenuous, and our archetypal wounding all the deeper.

In 2016, at any given time, an estimated 40.3 million people worldwide were in modern slavery, including 24.9 million in forced labour and 15.4 million people in forced marriage. Nearly five million were victims of forced sexual exploitation, and women and girls account for 99% of victims in the commercial sex industry. That’s a whole lot of trauma let loose on the Earth. Whether we are conscious of this or not, we are all absorbing this trauma that exudes from the Land, drinking of the same polluted wells, never feeling that our thirst is completely slaked. The Wasteland somehow becomes acceptable as we know no different and we continue to elect wounded and maimed kings to lead us who seek only to dominate and control, to perpetuate the cycle of disconnection and trauma. 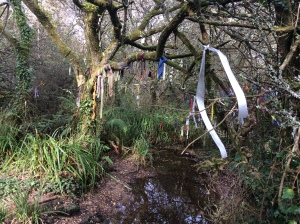 But as in every age there are those who step forward to embark on the quest, to recover all that has been lost and retrieve the gifts of the Grail from our deep subconscious. Every act of outward compassion or kindness, or action taken to protect or care for the Earth helps release the trauma and re-member our connection, however fragile and tenuous. In particular, when we acknowledge or care for our waters, rivers, oceans and wells we are reviving our ancient bond to the source of all life, the life blood of the Earth itself. The Well Maidens are returning and their purpose should be acknowledged and deemed to be important once again.